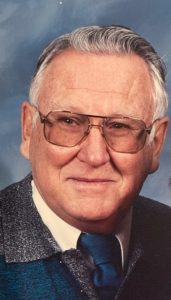 Burial will be at the Logan Cemetery in Logan, Iowa.

Norman Eugene “Gene” Pitt, age 90, of Bennington, NE passed away on Tuesday, July 27, 2021 at Immanuel Medical Center in Omaha, NE. Gene was born February 27, 1931 to Lawrence Rodney Pitt and Edith May Godden in Cass Township, Persia, Harrison County, IA. He graduated from Logan High School in May 1949. Beginning in January, 1950 Gene served a 4-year term in the United States Air Force where he took electronics and advanced radar courses, worked as a radar technician on B36 continental bombers, went on a secret training mission overseas, and was promoted to Staff Sergeant and supervisor of the radar maintenance shop. He was accepted into the Air Force Cadet program but instead chose to marry the love of his life, Evelyn Lorraine Finken, on November 8, 1952 at St. Patrick’s Catholic Church, Missouri Valley, IA.

Gene received his Bachelor of Science in Electrical Engineering from Iowa State University in May 1969 and his Master of Business Administration from the University of Colorado in May 1971. He took his family all over the United States during his distinguished electrical engineering career, returning to rural Logan, IA in 1974 to work at Offutt Air Force Base near Bellevue, NE. He was especially proud of his work as lead engineer on the Ballistic Missile Early Warning Site (BMEWS) in Alaska and on the Minuteman missile silos.

Gene was a member of St. Anne’s Catholic Church in Logan, IA where he was an active volunteer. He enjoyed hunting and fishing, carpentry, gardening, amateur winemaking, listening to music, nature, playing cards, organizing family reunions, and piloting small planes. He was also keenly interested in genealogy, writing many books filled with stories of family history and anecdotes. He relished eating ice cream, his wife’s chicken fried steak, and Morel mushrooms. Gene was very fond of telling riddles and jokes, especially with his grandchildren, and delighted in mischievous teasing. Most of all, he adored his family and his Lord Jesus.

Memorials may be directed to Right to Life and St. Anne’s Parish.

IN LOVING MEMORY OF

“Amazing Grace”, “How Great Thou Art”, “On Eagle’s Wings”