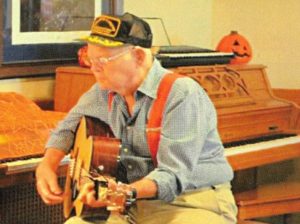 After the Funeral Service there will be a luncheon and a time of gathering at the Logan Christian Church in Logan, Iowa.

Burial will be after the luncheon at the Soldier Valley Cemetery in Pisgah, Iowa.

Calvin was born at Soldier, Iowa on November 4, 1924 to Guy and Gunda (Swenson) Harris.  He attended Harris Country School through 8th grade then graduated from Soldier High School in 1941.  Calvin worked on a farm then started farming for himself in 1950.  Later he purchased Skelly Gas Service in Pisgah and Old Home Fill-er Up An’ Keep on A-Truckin Café made famous with C.W. McCall and Mavis for Old Home Bread Company.  In 1970, Calvin was service manager for Hutchinson Chevrolet and in 1974 was service and parts manager for Dayhuff Chevrolet in Logan, Iowa, where later Calvin purchased the dealership.  In 1984, Calvin sold the dealership and retired but kept busy driving a Logan school bus for eight years and loved spending winters in Meza, Arizona.

Calvin loved to sing and play his guitar, entertained at Westmont Care in Logan.  Calvin also enjoyed working crossword puzzles and walks with his dog, “Chloe”.

There will be a visitation for Calvin from 9:00 a.m. until 10:30 a.m. at the Logan Memorial Chapel.  Family would like to invite everyone for a luncheon at the Logan Christian Church following the service. Burial at Solider Valley Cemetery will be after the luncheon.

Memorials may be directed to Logan Christian Church and Logan Fire and Rescue.